Soybeans know what time it is

Most plants depend on the seasonal change in the length of day and night to trigger flowering. This way flowering occurs at the optimum time of year.

On the other hand, plants that are photoperiod insensitive or day-neutral (such as corn) flower regardless of the daylength. In photoperiod sensitive plants, the length of darkness is determined through internal mechanisms in their leaves. Once the length of darkness is longer or shorter (depending on the species) than their “critical length” a signal is sent to begin flowering.

Interesting fact: It wasn't until after the naming conventions “short-day” and “long-day” were introduced in the 1920s that researchers discovered that plants are actually measuring night length of darkness and not day length. But by then the terms had become common place so they were kept.

Soybeans are a short-day species, meaning flowering is initiated by the lengthening of darkness. After the summer solstice (June 21st), as the days start to get shorter and the nights get longer, soybeans will begin flowering. This is not a hard and fast rule, however, and there are other factors that can influence the timing of flowering, such as temperature, cultivar, and planting date. 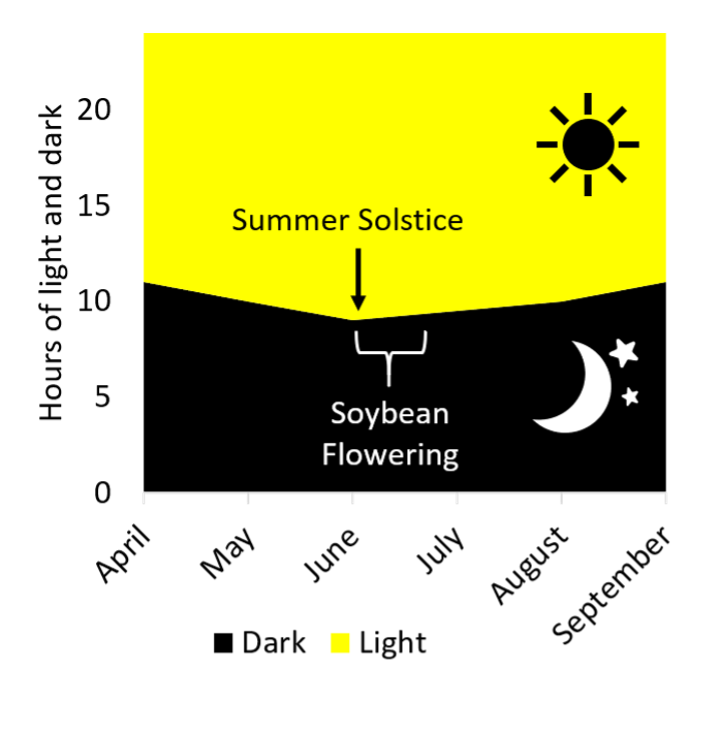 Under ideal conditions, early planted soybeans may begin flowering before the summer solstice, but they will ramp up their flowering once the days start to get shorter and the nights longer. The development of numerous varieties of soybean with different rates of maturity has affected the way photoperiodism plays a role in soybean development.  Generally, early maturing varieties are less photoperiod sensitive than later-maturing varieties.  Learn more about this from OMAFRA soybean specialist Horst Bohner.

Remember that regardless of planting date, soybeans have evolved to know the plan and will do their best to flower on time and come to yield as scheduled.