The fundamental process in plants is their ability to produce their own energy through the process of photosynthesis. Eighty-five percent of plant species on earth, including soybeans, are C3 plants. This means they conduct their photosynthetic processes in the "normal" way without any adaptions.

Unfortunately, there is a flaw in the normal way photosynthesis is conducted called photorespiration.   When things are going well, plants use a process called the Calvin cycle to create energy by fixing carbon dioxide (CO2) and expelling oxygen (O2) as a biproduct. The Calvin cycle uses rubisco, among other enzymes, to complete this process.

Under adverse conditions, namely high temperatures, photorespiration will start to occur. That’s when plants close their stomata to prevent water loss, which inadvertently inhibits CO2 uptake.  Additionally, rubisco develops an increased affinity for O2 rather than CO2. Essentially this means C3 or 'normal' plants start to use O2 rather than CO2 to create their energy, leading to a significant reduction in their energy production. Less energy production means reduced growth and ultimately yield loss.

Some species of plants, such as corn, have solved this problem.  Corn is a C4 plant, which means it separates the intake and fixation of CO2 from the Calvin cycle, effectively preventing rubisco to mistakenly fix O2 rather than CO2. Doing this does cost energy but it’s outweighed by the energy benefit of preventing photorespiration at higher temperatures.

Photorespiration decreases soybean yield potential by about 36%. Put in context, reducing this loss from 36% to 31% would be worth approximately $500 million annually in the USA alone1. 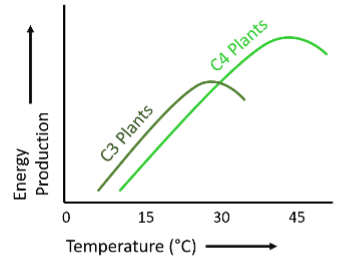