In 2018, researchers at the University of California documented the first known U.S. occurrence of spinosadresistant Drosophila suzukii, near Watsonville. Now, some berry and cherry producers along California’s coastal counties and the San Joaquin Valley are noticing reduced efficacy of insecticides, which are frequently used for management of SWD in organic and conventional fields.

“Spotted wing drosophila is the most challenging pest in berries and small fruits and is the most important pest management issue for growers. If you don’t manage spotted wing drosophila or don’t manage it correctly, you won’t have a marketable crop,” says Dr. Jhalendra Rijal, area IPM advisor, University of California Cooperative Extension. “It’s an invasive species without effective natural enemies in the U.S.”

SWD lays its eggs undetected in soft-skinned fruits. The larvae then hatch and eat the fruit from the inside out, making it unmarketable. D. suzukii was first reported in North America in 2008 in Santa Cruz County, California, in commercial caneberry and strawberry fields. Since then, it has spread rapidly, making it one of the most economically damaging pests of small fruits. 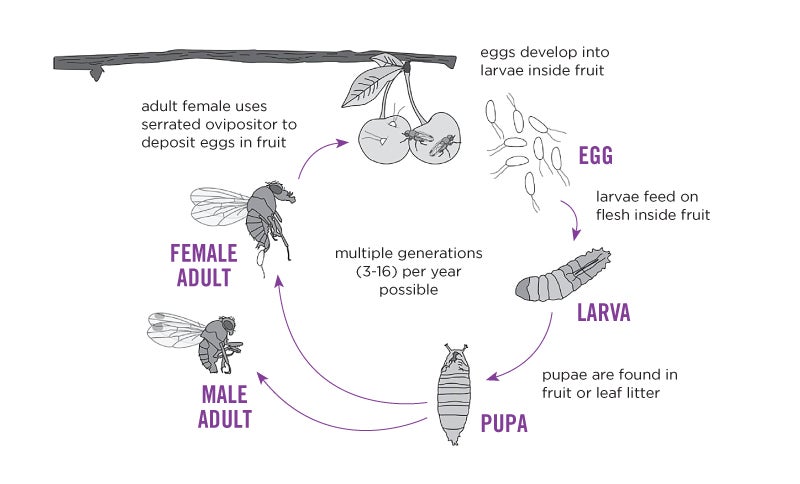 Before targeted spray programs were implemented, growers in California, Oregon and Washington reported substantial yield losses due to D. suzukii in various crops, reaching as high as 50% in raspberries and blackberries, 40% in blueberries and 33% in cherries, University of California Entomologist Frank Zalom reports.

“Damage from SWD swiftly becomes severe due to its prolific egg laying in healthy, ripening fruit and multiple generations per season,” says Rijal. “SWD lay their eggs in berries from the time fruit is first turning color until harvest so crops are vulnerable for a long time, requiring multiple insecticide applications for effective management.”

Emerging resistance to spinosads heightens the need for integrated pest management strategies to slow the development of resistance and maintain the efficacy of a limited number of insecticides effective on SWD. Rijal urges growers to deploy a mix of cultural and chemical practices.

Growers should deploy traps to monitor the presence and density of SWD in the orchard or field. Detecting early fly arrival and knowing the susceptible stage of the fruit is critical for initiating control.

Insecticide mode of actions and classes must be rotated in spray programs to delay the onset of resistance. Four insecticide classes generally provide excellent activity on SWD. The four classes and their IRAC group are: spinosyns (Group 5), pyrethroids/pyrethrins (Group 3A), organophosphates (Group 1B) and diamides (Group 28). Spray intervals generally range from seven to 14 days.

“Insecticide coverage in the canopy is critical since we are targeting adults before they lay eggs in the fruit,” says Rijal. Use a calibrated sprayer with appropriate volumes. Spraying during the cooler part of the day (morning or evening) and into the lower canopy likely exposes more flies to insecticide as flies are more active in cooler conditions.

With much of the berry and cherry crop being exported, MRLs set by importing country or the region are also an important consideration for insecticide selection and timing.

Most insecticides commonly used to control SWD can reduce survival of natural enemies so be sure to monitor for secondary pests including scales, mites and aphids. “In the last couple of years, we have seen more San Jose scale present in cherry orchards, something that was not a concern before,” notes Rijal. “Early sprays can kill natural enemies that keep mites and scale insects in check so consider using more selective or reduced risk insecticides if available.”

Combining cultural best practices with thoughtful selection and rotation of insecticide active ingredients will help slow the spread of resistant SWD and delay the onset of resistance to other insecticides. In the meantime, researchers continue to work on alternative management strategies such as classical biological control to increase tools in the IPM arsenal.

The USDA Specialty Crop Research Initiative has a national team of scientists who have been working on sustainable IPM strategies for SWD since 2015. U.S. researchers have submitted permits for field trials on two promising parasitoid species from Asia: Ganaspis brasiliensis and Leptopilina japonica that could be released to help control SWD.

Always read and follow all label directions, precautions and restrictions for use. FMC and the FMC logo are trademarks of FMC Corporation or an affiliate. ©2021 FMC Corporation. All rights reserved. 21-FMC-0739 04/21

Learn more about how to use our products and sign up to receive more information.

Enter your [postal] code to see information about local products, representatives and retailers, along with special offers in your area.